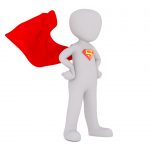 “On the 18th May 2021, a draft amendment to the rules below was proposed by the government which will allow the Super Deduction or Special Rate Allowance Expenditure to be claimed on assets which are installed in or on buildings which are leased, where the main purpose of those assets are to contribute to the functionality of the building.

Is it a bird? Is it a plane? No, it’s the Super Deduction! doesn’t really have the same ring to it does it?

But for those of us working in tax, the new Super Deduction is the area we’ve had more questions on than any other since the announcement by the Chancellor of an enhanced capital allowances regime which would allow either a 130% deduction on plant and machinery purchased for the main pool or a 50% deduction for plant and machinery in the special rate pool.

As with all good tax legislation, the devil is in the detail and following the publication of the draft legislation we’re able to answer:

Let’s take them in order…

Who qualifies?
We expected anyone in business, regardless of being a sole trader, partnership or company to qualify.

However, the legislation specifically states that to qualify, expenditure must be incurred by a company within the charge to Corporation Tax.

Therefore, only companies will qualify for the new relief.

What expenditure qualifies?
Firstly, expenditure has to be on new and unused plant and machinery and therefore expenditure on second-hand equipment will not qualify. Assets acquired for leasing are also excluded from the new reliefs, but please note the amendment to these rules in red above.

Assets qualifying for the 130% deduction, or “Super-Deduction Expenditure” are plant and machinery that would have normally qualified in the main pool such as:

Assets qualifying for the 50% deduction, or “SR Allowance Expenditure” are plant and machinery that would have normally qualified in the special rate pool such as:

And then the big question… what about cars? Unfortunately, as may have been expected cars do not qualify for this relief as they are specifically excluded.

Businesses may also wish to reconsider their capitalisation policy, i.e. some businesses typically only capitalise items over a certain expense level in order to simplify the accounting. With the super deduction, it will now be beneficial to capitalise as much as possible in order to maximise the enhanced relief where accounting rules allow.

Businesses may also wish to consider whether there are staff costs that can be appropriately capitalised as part of the qualifying spend e.g. if staff time is spent on installing plant.

How does timing of expenditure work?
Expenditure needs to be incurred on or after 1 April 2021 but before 1 April 2023.

The expenditure is treated as incurred when an unconditional contract is entered into. Specifically, though, Mr Sunak announced that any contracts entered into before 3rd March 2021, regardless of when the unconditional obligation to pay arises, will not qualify for the new reliefs.

Clearly, any spend that was planned for March 2021 will be better, where possible delayed until after 1 April 2021.

How does the new Super Deduction interact with the existing Annual Investment Allowance (AIA)?
It was also confirmed that the extension to the £1m AIA which allows a 100% deduction on the expenditure noted above continues to 31 December 2021.

Therefore, in practice, rather than claiming the SR Allowance Expenditure deduction of 50%, it is likely businesses would continue to claim the AIA as this gives a 100% deduction, rather than 50%.

It would only be beneficial to claim the SR Allowance Expenditure deduction if you were to spend more than £1m on special rate pool additions (not including cars!), or on second-hand expenditure.

How are disposal proceeds dealt with?
Additional rules have been drafted on how proceeds are taxed for assets on which a Super Deduction Expenditure allowance (130%) has been claimed and depends on the date on which a disposal takes place.

If a disposal of these assets takes place in an accounting period that commences before 1 April 2023, the amount is determined as follows:

Typically, on disposal of plant in the main pool, the proceeds received are simply deducted from the overall pool balance. As the pool balance is written down at 18% per annum, this effectively taxes the proceeds over several years.

However, under the new regime, proceeds received are taxed when received and therefore taxable upfront!

Without going into too much more detail, rules have also been brought in to tax 50% of disposal proceeds upfront for assets on which SR Allowance Expenditure (50%) has been claimed, although this is not subject to any time limit in the future.

Summary
In summary, we would recommend that you should consider delaying buying any qualifying plant until after 1 April 2021 and that you consider your planned Capex spend over the next two years to maximise your Super Deductions.